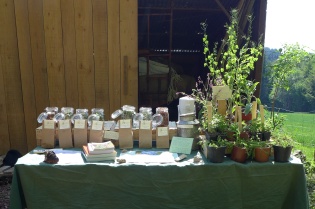 This passed Saturday, the festival close to the village of Berbezit combined great summery weather with interesting (and funny) inventions, a plant exchange, botanical walks and workshops, as well as a musical evening with a slightly sweaty atmosphere. With Neorigins we were present at the market, and also helped to prepare for the wild kitchen workshop.

Since the idea of the festival is to produce all electricity needed “by hand”, or should I say “by legs”, one of the funny inventions that seemed to make a great success with the visitors, was the bicycle-ice-cream-maker. Pedaling on a warm day = hot, making icecream in the same time = cool. All adding up in an ideal combination!

The ice-cream-maker in bicycle shape underneath the umbrella.

The late afternoon continued on the same theme, with a great wild food based meal where the visitors could choose from nettle-soup, various “wildly” garnished pizzas made in the wood stove, and chapatis with lots of fresh wild vegetable spreads.

The evening then offered a great act of improvisation theater and several bands playing music. And to keep the lights and the sound running everybody had to – yes you guessed right, contribute to produce the energy needed by pedaling on one of the numerous bikes around, or running in the giant hamster wheel that was also installed at the site. I guess the evening was getting better and better the later it became, given the occasional flickering in the lights and some cuts in the music in the beginning, but finishing with several full power concerts in the end!

It was an overall nice event and it is inspiring to see people getting together with such energy to share their great ideas. Let’s spread the vibe!

This blog is written by two passionated gardeners / wild pickers, Therese Rosén Häggman and Jason Gallon. With the goal to contribute to a highly energetic life on earth we share inspiration about everything between gardening & plants, to nutrition and personal / spiritual growth.

The lovely circle of our garden

Close to the village of Grandrif in Auvergne, France, we cultivate a large variety of vegetables, fruits and berries for our own consumption and also some non-endemic roots, seeds and greens that offers great nutritional and curative properties for Neorigins. Inspired by the wonderful nature surrounding us we cultivate according to permaculture priciples and all organic.